Teach Me Life
Home Lifestyle A man walks into a tavern. 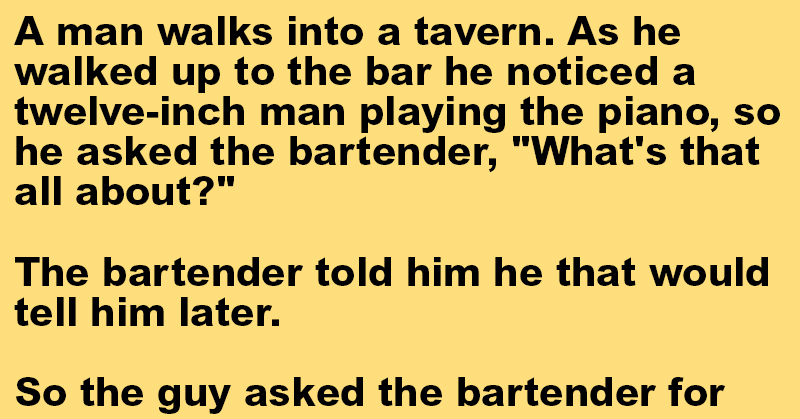 A man walks into a tavern.

As he walked up to the bar, he noticed a twelve-inch man playing the piano, so he asked the bartender, “What’s that all about?”

The bartender told him he that would tell him later.

So the guy asked the bartender for a drink.

The bartender said, “Before you get your drink, you get to rub the magic beer bottle and make one wish.”

He went over to the magic beer bottle and rubbed it.

Out came a genie.

The genie, of course, said, “You have one wish.”

The guy thought about it and then wished for a million bucks.

A cloud of smoke filled the room, and then both the genie and the guy disappeared.

In a few minutes, the guy reappeared back in the bar with a million ducks all around him.

The guy was astounded and said to the bartender, “Hey! I didn’t want a million ducks.”

The bartender replied, “Do you think I wanted a twelve-inch Pianist?”

Five Men In A Bar 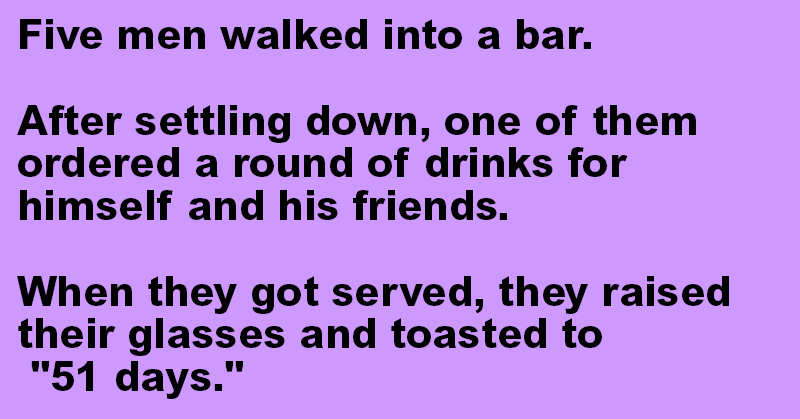 Five men walked into a bar.

After settling down, one of them ordered a round of drinks for himself and his friends.

When they got served, they raised their glasses and toasted to “51 days.”

After the first round, one of them ordered another round.

Again, the men toasted to 51 days.

They repeated the act for their third round.

The bartender noticed that the men were continuously toasting for 51 days and asked them what it signified.

One of the men responded and said, “We just finished a jigsaw puzzle. On the box, it said, “two to four years” and we finished it in 51 days!

Riddle me this: What does a man do only once in his lifetime?

Most people will fail this test – can you find the odd symbol out?

Picture puzzle: Can you find all the 3’s in the image?

A Brunette, Redhead and Blonde entered into a game show

Only A Few People Can Get This Right: How Many Pencils Do You See?

Riddle me this: What does a man do only once in...

Most people will fail this test – can you find the...