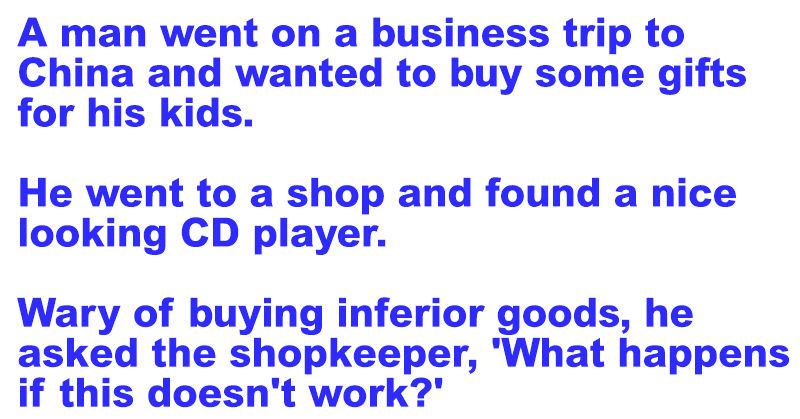 A man was on a business trip to China and wanted to buy gifts for his children.

He walked into a store and found a nice-looking CD player.

Wary of buying inferior goods, he asked the shopkeeper, ‘What happens if this doesn’t work?’

The shopkeeper quietly points to the only English sign that reads, ‘GUARANTEE NO SPOILED’.

Feeling assured, he paid for the CD player and returns to his hotel.

He tried to use the CD player after returning to the hotel, but it wouldn’t even switch on.

He quickly returned to the shop and asked for a refund or an exchange for another unit.

When the shopkeeper refuses to give either, the man points to the sign assuring him of the guarantee.

The shopkeeper then said, ‘Brother, you are in China. We read from the right to the left.’ 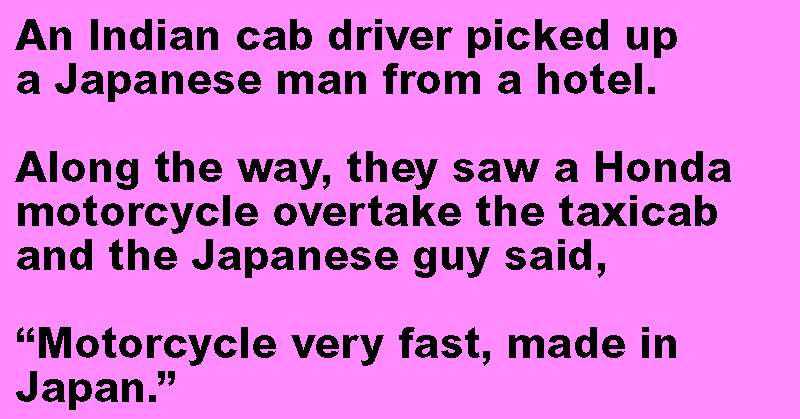 An Indian taxi driver picked up a Japanese man from a hotel.

Along the way, they saw a Honda motorcycle overtook the taxicab and the Japanese man said, “A very fast motorcycle, made in Japan.

Then a Toyota car overtook the taxicab and the Japanese man said, “A very fast car, made in Japan.”

When they reached the destination, the fare was 1,500 rupees.

The Japanese man thought that the ride was would only cost 500 rupees.

He asked the driver why the ride was so expensive.

The driver said, “A very fast meter, made in India.”