Teach Me Life
Home Lifestyle A police officer pulls over an elderly couple. 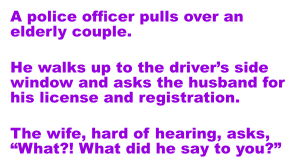 A police officer pulls over an elderly couple.

He walks up to the driver’s side window and asks the husband for his license and registration.

The husband replies, “He wants my license!”

The officer asks him if he knew how fast he was going.

The husband yells back, “He says I was speeding!”

As the officer looks at the license he notices they’re from Ohio.

“You know, I used to live in Ohio. Worst place ever. I was seeing this woman there, and it was just miserable. She would never shut up, couldn’t cook, constantly belittled me, and “in bed time” was just awful.”

The old lady once again yells, “What?! What did he say to you?”

The husband yells back, “He said you two used to date!” 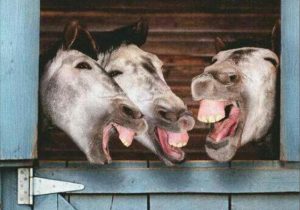 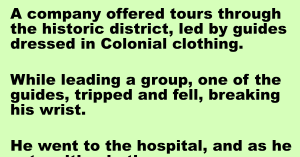 A man wore Colonial clothing, guiding tourists through the historic district. Suddenly, he tripped and fell, breaking his wrist.

He went to the hospital, and as he sat waiting in the emergency room, a policeman

Doing a double-take at him in his 18th-century garb he asked, ‘Just how long have you been waiting?’